The Upper Tampa Bay Chamber of Commerce proudly welcomed the Tampa Bay Brewing Company to our community on Friday July 31, 2015 at a combined ribbon cutting and beer festival featuring over 60 Florida craft breweries and a special performance from Stormbringer. Typically, you can find two classifications of online slots: classic and video https://www.topnewcasinos.co.uk/online-slots.

Oldsmar Mayor Doug Bevis is shown cutting the ribbon with owners John and Mike Doble.  This was also the 20th Anniversary of the founding of TBB and Mike said ironically that July 31, 1995 also had a full moon so one of their craft beers is named Full Moon Madness. 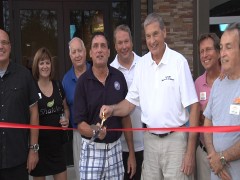 TBB is not just a brewery but was named as Tampa’s Best American Restaurant by Foursquare in 2013. They are located at 13933 Monroe Business Park directly across Race Track Road from the Oldsmar Flea Market.