The Executive Director of the Florida Department of Economic Opportunity Jesse Panuccio visited Mastercut Tool Corp. Friday November 20 for a press conference.  Panuccio was there to share good news about the Florida economy which now has the lowest unemployment rate in 7 years with average rising wages and noted that Florida has added nearly a million new private sector jobs reflecting our diverse economy. He noted the importance of manufacturing in that picture and pointed out that the Tampa Bay region leads the state in manufacturing opportunities led by businesses like Mastercut which started out in a basement with one man and one machine and has recently celebrated their 30th Anniversary and is a global business with 120 plus employees and growing. Panuccio noted the direct correlation between tax cuts and employment and said that Governor Scott is pressing for a $1 billion in tax cuts this upcoming legislative session.

Mike Shaluly, President/CEO of Mastercut, said that during their expansion they will be buying some very expensive machinery and supported the Governor’s effort to eliminate sales tax on equipment purchases.  He noted that the tax break on a $500,000 purchase is $35,000 which directly converts to the salary of new employee to operate the machine. 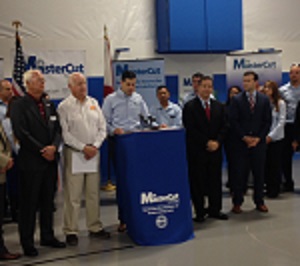