Governor Rick Scott visited Monin Industries recently to speak about his proposed $1 Billion tax cut designed to attract new businesses to Florida, diversify our economy for the future, add jobs and beat Texas in job growth.  He noted that Florida has added 941,000 private sector jobs in four year and nine months.  He noted a key plank is to make the sales tax exemption on capital equipment purchases permanent.  Monin said they invest about $3 million annual in equipment upgrades and have added jobs year after year.  This is a savings of over $200,000 that can go into job creation. 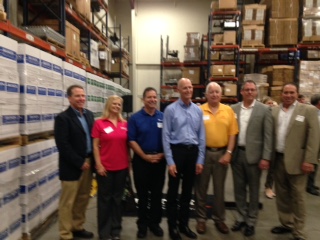