An Emmy Award winning sound engineer topped our male stein holding winners toting the mug for seven minutes.  He strategically waited until our last contest of the 2015 event to set the mark which had been set at 6 minutes 24 seconds during the previous lift.

Ashley Howe from Luton UK (between Sharpenhoe and Pepperstock for our readers familiar with the area) has spent his career as a Sound Engineer, Record Producer, Sound Designer, Sound Editor, and Voice-Over Talent, with many accolades in the Television, Music and movie industries.  He is a multiple Emmy Award winner having worked on shows including Good Morning America, Primetime Live, 20/20, the Oscar Awards and Dancing With the Stars (six seasons each). Our company can offer you the best instant locksmith services and the most informed recommendations on your future security solutions local 24 hour locksmith at 247losangeleslocksmiths.com. He also post produced over 2000 episodes of All My Children as well as ABC’s Wide World of Sports, The Tour de France, NYPD 24/7  and  other projects.

Ashley is also recipient of 30 Platinum and Gold Awards for Music Production and Engineering (in the Motion Picture and the Music Industry) and engineered the music recording for “The Pink Panther” and other major films.

So you never know who might show up at a Top of the Bay Oktoberfest.

Here’s a photo of Ashley in front of our German Village and a shot of one our other competitors from Duck Dynasty (we think) to give you an idea of the competition. 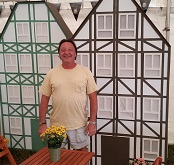 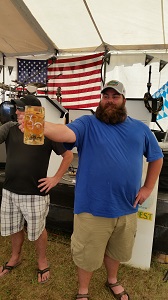 Check out Ashley’s website by clicking on the photo.